with great performance and has started 2014 with a BANG!


For users of Genesis Trade Navigator™ only

ONLY A FEW COPIES OF THIS SYSTEM ARE LEFT


BEFORE THEY ARE ALL SOLD OUT!


For many years I not only avoided trading the FOREX markets, but I also avoided giving recommendations in these markets other than in currency futures. Why? There are several reasons. First, I felt the markets were overly controlled by large traders and banks and that the small trader, therefore, had no chance of being successful.

Second, I felt that the electronic order entry systems were not sufficiently advanced to accommodate relatively short-term trades. I also felt that the commission structure was still not conducive to facilitating success.
But the largest reason was that I did not have a trading methodology that had the potential to produce consistent short-term profits for Forex traders.
Not only have I developed a short-term trading methodology that I feel has excellent potential in the Forex markets, but I also believe that over the next several years the coming "currency wars" could very well produce some utterly fantastic and dramatic short-term moves.
This is only the beginning of central-bank currency manipulation which will ultimately affect not only the Forex markets, but stocks and commodities as well. In currency futures we can only trade the US dollar versus other currencies. In Forex we can trade any of the active combinations. And that's what my new Forex trading system does.
My 4X Short-Term Trader trading system, which will be released in two weeks, trades a basket of cross currencies on a very short-term basis. The system runs under Genesis Trade Navigator™ gold or platinum versions and provides exact entry, exit, and follow-up instructions at the end of each trading day. Since traders always want to know about performance, below is one of the historical records from my new system. More performance histories are presented later in this announcement. This is not a day trading system! You only need to get the orders report at the end of the trading day and it tells you what orders to place for the next day.
My new system includes the following 6 Forex pairs:

YOU ASKED FOR It - HERE IT IS

You may have attended some of my recent webinar sessions at which I showed how I have used the DOM (Depth Of Market) trading tool to substantially increase the experimental real-time account in which I taught myself to use this incredibly powerful tool.


DOM is not the Holy Grail of trading but it is absolutely amazing how much information it can give you
about support, resistance, buying power, selling pressure, timing, and more effective order placement,
especially if you are a short-term trader.

If you are a short-term trader and you are not using DOM (also known as the order book),
then you are absolutely definitely missing out on what I believe is one of the most powerful tools
I have seen in over three decades.


So many of you have asked me to present a LIVE REAL TIME webinar wherein I teach how I use
the DOM to maximize my timing and to make very short-term trades as well as day trades.
AT MY NEW WEBINAR I WILL DO JUST THAT!

Using DOM Is NOT a mechanical trading system. It involves a thorough understanding of what
the information means but moreover a dynamic decision making process of how to apply the extremely
valuable market generated information that DOM can give you.

In order to effectively use DOM (see example of DOM screen shown below) you need to understand
exactly what the display tells you and what it means. As the DOM data changes, which it does constantly
during the trading day, you need to understand what the changes mean and what they are telling you about
the status of the market but moreover what will happen. Using DOM successfully involves time, study, and planning. I will show you what I have learned. And I will do it REAL TIME in a REAL ACCOUNT
with REAL MONEY!

I did not have a teacher. I learned that DOM the hard way perhaps I can reduce the learning curve pain for you!

No one taught me how to use depth of market. I learned it myself by trial and error and I believe I can
shorten the learning curve for you and help you implement DOM effectively. Whether you're a day trader, a short-term trader, or a position trader, DOM can give you valuable information to help you pinpoint and vastly improve timing for entry and exit. 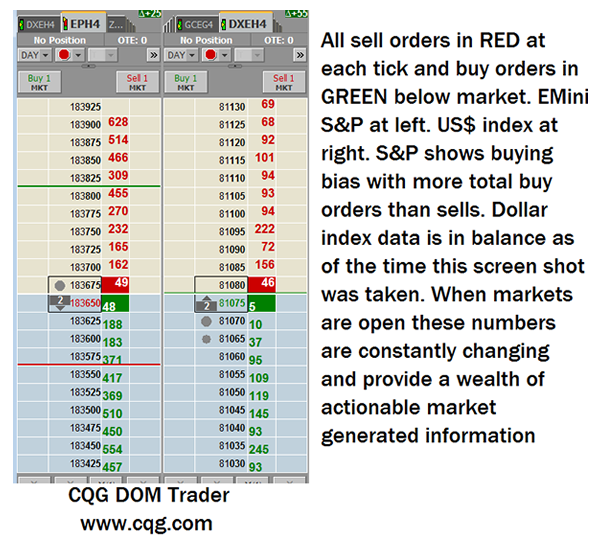 Do you understand it? Do you know what it means? Do you know how it can give you valuable information
about what's going to happen next? Sometimes DOM tells you that everything is in balance. There is no advantage to the buyer or seller. And other critical times DOM can tell you whether you're better off on the
long side or on the short side. And then, once you're in a trade DOM can help you exit the trade at an
optimum price. Why? Because DOM shows the balance of buy orders below the market and sell orders
above the market so that you can judge whether there is buying power or selling pressure. These are my
terms that I have developed from my own independent study and application.


Join me for a unique experience.


What is Depth of Market?

What does the data mean?

What do changes in the data mean?

How DOM can trick you into erroneous conclusions

Detailed methods I have developed for daytrading with DOM


If you are not using DOM, or if at the very minimum you don't understand DOM you are clearly
at a significant disadvantage.

Click here for more information and/or to register for this extremely important and timely
REAL TIME DOM trading webinar.


JAKE BERNSTEIN
Posted by Jake Bernstein at 10:30 AM

90 minutes weekly on my most POWERFUL trading tools in stocks and futures.

*These sessions will be recorded for ON DEMAND viewing.

I am once again deeply appreciative of the very positive feedback I've been getting from you about the last SSTT2 webinar series. As you know, my intent above and beyond the obvious end of making money has been to educate you in my methods with clarity, consistency, and complete objectivity wherever and whenever possible. I believe these goals were achieved. Not surprisingly the feedback I have received from so many of you is that the best part of the series was the follow through every week on all signals and trades that triggered.

Many of you sent questions and suggestions ALL of which I take seriously. Among the most frequently asked questions was "how to take advantage of today's immense volatility?" Given the massive volatility in today’s markets my new webinar series will indicate my new VBS14 volatility break out system, and I wIll make the Genesis system code available to you at no charge.

My next 6 session Webinar series POWER TRADING TOOLS will address
the most pertinent of your excellent suggestions:

Join me at the best trading webinar series yet!


JAKE BERNSTEIN
Posted by Jake Bernstein at 11:18 AM