Prepare for the massive moves ahead!
Click here to Register

Attend the single most timely
and critically important FORECAST I have ever presented.

Can’t attend the live event?
THIS SESSION WILL BE RECORDED FOR ON DEMAND VIEWING

Get ready for massive volatility that could shake
worldwide economies to the core of their foundations!

As central banks throughout the world continue to print more andmore fiat money as their preferred
method of avoiding financial catastrophe, the odds of serious inflation increase every second.
It’s only a question of time before most world economies find themselves in the jaws of potentially
crippling inflation.

Based on my solid research, patterns, cycles, timing, and economic history, I believe that in 2015
many markets which are currently out-of-favor have the potential to begin huge moves to the upside.
Among some of the markets that could begin explosive moves upward in 2015 are copper, precious metals, energies, and – believe it or not – some of the currencies vs. the US Dollar!

You need to ask yourself why insiders are currently accumulating large long positions in markets such
as the European currency, Japanese yen, vs. US dollars, and some of the food and agricultural commodities.

My 2015 annual forecast will open your eyes to the big moves that are likely waiting us right around
the corner. Here are some of the specific opportunities I will alert you to in my 2015 forecast:

The stock market pattern that has never been wrong since 1905!

Long-Term cycles forecast for US stocks and Hang Seng

Intermediate term cycles forecast for US stocks and Hang Seng

Price and time projections for all major markets

Copper: the next big upside mover - why commercials are buying

Heavy insider buying in euro and yen: what does it mean?

Interest rates: the great gift comes to an end

Real estate forecast: the best is yet to come

Will lumber surge to new all-time highs in 2015?

How to prepare for the inevitable and unavoidable inflation

Will the grains finally explode? Is that starting now?

Clear and powerful signals now being generated by the COT

Coffee explodes as predicted: what’s next?

Crude oil: bargain of the decade?

The future of agricultural commodities

The social media bubble: why these stocks could collapse in 2015

Terrorism and the markets: what you need to know and do now

Specific support and resistance levels in all major markets

My inflation protection portfolio: an absolute must!

Trading bitcoin: yes or no?

My forecast for US farmland was totally right. What’s next?

HUGE profits coming in the yield curve spread? How to get on board

Record volatility awaits: how to harness and profit from it in 2015

Electronic trading security threats: how to protect yourself

See you at this BREAKTHROUGH session...

Posted by Jake Bernstein at 1:30 PM

The Insanity Continues
My flat-fee all inclusive Webinar Package for 2015
Your BIGGEST Savings of the Year!

Many of you have asked me to repeat my single price webinar package deal offered for all of 2014. In other words, you want access to all my 2015 webinars at a flat all inclusive price that includes every webinar I do on my own, no matter how many I do, and no matter what the total price may be.

That is a reasonable request because it will save all of us time and money. It will save staff time on processing and you save big bucks!
Here are the big savings facts!

If you had purchased separately all of my webinars in 2014 to date, you would have spent over $5300. But the webinar deal was LESS THAN HALF THE TOTAL PRICE,
so  you got over twice the value.  And the year isn’t even over yet.

More top notch Webinars are coming, including the 3-hour 2015 Forecast,
all as part of the one price package deal.

Here are just a few of the topics I have planned for Webinars in 2015:

I will save staff time and money by only having to process your subscription one time.
It is a win/win situation. So save big bucks and get all my webinars for 2015
at the super low discount package deal.

Sign up NOW...Click the link below, before this great offer expires!
* This offer is not retroactive.

This offer includes all webinars including emergency webinars, with the exception
of special webinars that I will run for current and future mentoring students or
any webinars I speak at, with, and/or for other firms or individuals.
The 2fer promotional card is not applicable with this offer. 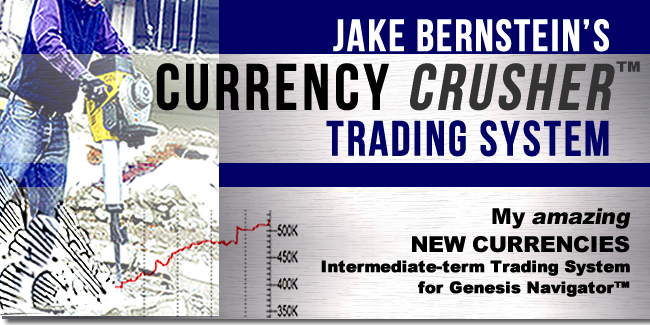 
that blew me away with its performance!


for Genesis Navigator™ is possibly my best trading system ever!

Every few years a trading idea inspires me to do in-depth research.  And in a few very rare cases the result amazes me from the very beginning.  And that’s how it has been with my new currencyfutures system.  Based on one of the simplest patterns in technical analysis, my CURRENCY CRUSHER (JBCC) is fully objective, able to capture monster moves, easy to use, and it doesn’t overtrade.
The surprising discovery!
When I first looked at the simple three-day pattern that forms the basis of my new system I dismissed it as “something I have seen thousands of times”. But when I looked at the pattern within the context of my set up trigger and follow through trading model and when I tested the first market, I realized that I had not allowed myself to see the full picture because I ignored my most basic and powerful concept: the model.
I had to look at the results over and over to convince myself they were valid.
Although I didn’t feel that I had discovered the Holy Grail, I did have to look at the algorithms
and rules many times over before I believed that I had discovered something truly valuable.
But test after test and market after market the pattern proved valid and, best of all it achieved its most superior performance in the markets that move the fastest and the most consistently, the currency futures.
Setup, Trigger and Follow-Through at its BEST!

JBCC conforms fully to my very powerful SETUP TRIGGER FOLLOW-THROUGH model and contains a built in profit maximizing strategy. Because JBCC makes only about 40 trades per year it allows you to participate in a number of currencies.

Why now? Because October has been the BEST month for JBCC!
JBCC has been in the development process for quite some time. Timing is very important not only in placing trades but also in knowing when to begin using a trading system. Take a look at the chart below. It shows the historical record of JBCC on a monthly basis. You don’t need to be too smart to see that October, by far and away has been the absolute best month of the year for trading this system. Will it be the same this time? As we go to press JBCC has been short a number of currencies and is riding some very large open profits. These will most likely be closed out in October and will help propel the month to another strong victory. We can’t fine-tune all aspects of trading systems perfectly but this one is most interesting and it turned out this way not by design but by chance. 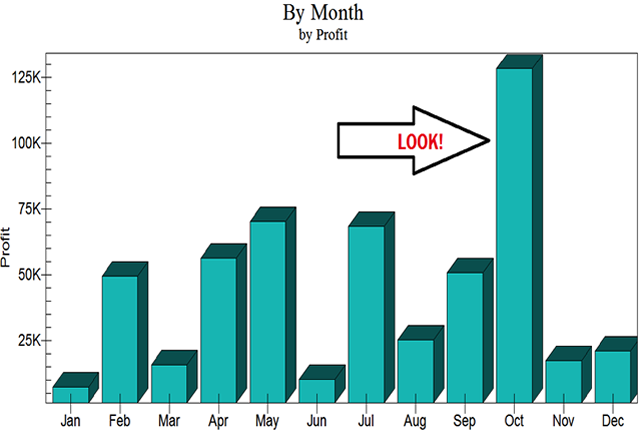